Now that President Trump has revealed the new logo for the sixth and newest section of the United States military service can anyone else see something familiar with this?

According to President Trump in his tweet on Twitter last Friday 24 January 2020 he said the “After consultation with our Great Military Leaders, designers, and others, I am pleased to present the new logo for the United States Space Force, the Sixth Branch of our Magnificent Military!”

This new logo for the USSF (the United States Space Force) which has an uncanny resemblance of the Star Trek USS Enterprise logo, has a dark blue seal with the USSF name wrapped around and a delta sign on top of a globe which resembles an arrow shape similar to that used in Star Trek. The logo, which bears the date 2019 in Roman numerals, also is similar in design to that of Air Force Space Command, from which Space Force was created by legislation that Trump signed in last month. 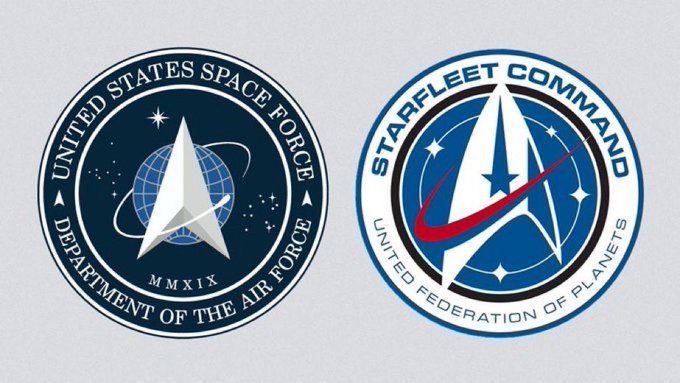 Space Force is the first new military service since the Air Force was created in 1947. It is meant mainly to improve the protection of U.S. satellites and other space assets, rather than to put warriors in orbit to conduct combat in outer space. The idea became a regular applause line for Trump at his political rallies. He originally wanted a Space Force that was “separate but equal” to the Army, Navy and Air Force, but instead, Congress made it part of the Department of the Air Force.

Is this just a case of everyone picking holes in something that President Trump has been involved in or is it a case of bad design and the lack of creativity? There have been many comments from other designers about this new logo and some of these go as far as to say that “this is a great example of the US President’s refusal to grow up”, plus a great fitting from the Trump Presidency. Others have indicated the Arrowhead has been part of military insignia forever and that the planet resembles that of the extinct PanAm emblem.

Maybe those involved in the designing of this logo didn’t realise they had come up with something similar to the Start Trek Fleet Command logo and it was totally by accident. Either way, is this a good or bad logo from a designer’s point of view?

According to the Air Force, the design was loaded with meaning. “The slight tapering of the orbital ellipses represents the characteristic eastward motion,” the Air Force’s history read. “The centrally superimposed deltoid symbolises both the Air Force upward thrust into space and the launch vehicles needed to place all satellites in orbit. The distinctive dark blue background shading, small globe, and stars symbolise the space environment.”

That emblem was in use until December when the Space Force became its own branch.

In what may be the biggest testament to the artistic overlap between Star Trek and the government’s space efforts, NASA in the early 2000s hired Okuda, the Star Trek designer, to work on logos for a series of missions and programs.

Over several years, Okuda created program emblems for the Constellation, Ares, Orion, and Altair programs, as well as the emblem for the final servicing mission to the Hubble Space Telescope. In 2009, NASA awarded him the agency’s public service medal for “exceptional contributions to the mission of NASA.”

His response on Friday to the new Space Force logo was lighthearted: “Well, they say that imitation is the sincerest form of flattery!”